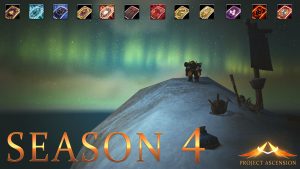 The Basics of Draft Mode

Draft Mode is a brand new playstyle unique to Ascension Classless WoW: rather than choosing a class, or selecting your own abilities, Hero will DRAFT their skills by picking one from three potential abilities every few levels. Looking for a challenge? Want to test yourself against the world and other players? Season 4 is right up your ally!

Each time you would normally receive an ability, you’ll instead draw 3 Skill Cards–cards that represent a specific spell or ability. These cards are drawn randomly, and you’ll be able to choose ONE of them to add permanently to your deck–gaining that ability. Over the course of your adventure you’ll draft an entire Hero, and the abilities you choose along the way will be your weapons to tackle end-game content. Whether dungeons or raids, battlegrounds or high risk, your Draft Hero will act as your avatar as you face off against Azeroth’s challenges.

Project Ascension is a Classless WoW Mod that allows players to jump back into the world they love with a brand new twist: instead of selecting one of the original 9 classes, players are able to create their own class–combining skills, spells, and talents in whatever way they choose to create their own custom Hero. Dive into dungeons, gather allies, and tackle the challenges of Azeroth like never before.

Ascension introduces a brand new mechanic: High Risk PvP. When you choose to enter this mode, slaying an enemy player causes them to drop a chest containing some of their equipped and inventory items, which you can loot. Gear up and conquer your foes on Project Ascension!

Additionally, customize your gear with mystical enchantments, allowing players to enhance their Hero further by increasing the strength of the skills they use the most.