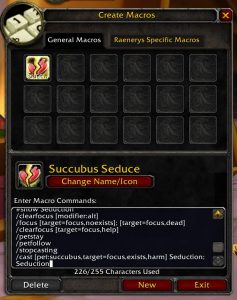 Succubus Seduce (Without breaking current focus)
If you use focus for other things, this macro will help you keep your focus target, while seducing. Either right or left click to seduce first time. Left click to re-seduce. Right click to change target and seduce that instead. If you left click before seduce is over it will break seduce and re-seduce in one go. If you let seduce run out the succubus will attack that mob. If your succubus is fighting something and you left click it will try to its current target, right click if you want it to seduce something else.

Felhunter Spell Lock
This macro will Spell Lock your pets target if he has one, or yours if he doesn’t.

Voidwalker Shield/Fel Domination/Summon Voidwalker
This will Sacrifice your VW, Cast Fel Domination, and then summon another VW. Will only work in combat.

Fel Domination Summoning/Soul Link
This macro will summon your imp with a normal cast. If you already have an imp summoned, it will cast Soul Link. If you are in combat and have any pet OTHER than the imp (which is alive), it will cast Fel Domination and summon the imp. You can force the macro to not cast Fel Dom by holding down any modifier key. This macro can be changed for your other pets by replacing the pet:imp and Summon Imp with the appropriate pets (felhunter, felguard, voidwalker, succubus).

I use a /pet attack macro attached to corruption. If I have my succubus out an seduce a target, if I throw corruption on another target my succubus breaks channelling of seduction and attacks my target.

Is there a macro that turns off pet attack while seduction is being channelled of any way around my problem? Da