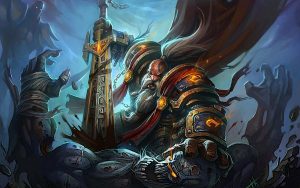 WoWPortal has implemented a Triple XP Weekend feature , all rates will be set to x20 to allow players level their characters and go straight for end content so you can begin an unforgettable adventure in the World of Warcraft ~ “Soulbound Realm”

WoWPortal is a Progressive PVE Server aiming towards a specific community and players, we are a high rate server, if you do not like long leveling process and you prefer to level quicker then we are the server for you! That being said, we are not a huge server, we currently have 150-200 players online.

All of our Raids and Dungeons were re-scripted and adjusted to match Blizzlike Standards using newest code style, we have an integrated Bugtracker System which gives players an easy way to report their issues which goes straight to our developers. Our Bugtracker and change-logs are available on our website. We also use Dynamic Spawn system and increased nodes density.

We also host a very unique : ABS Functionality which scales all raids and dungeons according to the amount of players in a group/raid. This allows for our content to be explored with a flexible party size, ranging from the full raid group down to the solo experience.

We reward players for their activity and their game time, we have a very unique Currency on our server “Activity Badges” with this currency you can access character services, trade goods, exchange services and much more.

While we are a PVE Server, we still offer features such as Arena 1v1, 3v3 SQ, Crossfaction Raiding, Crossfaction Trade and Mail and of course a Crossfaction AH and access to over 5000 Transmog Items from all future expansion including: Ny’alotha Raid, Battle of Dazar’alor, Mythics and Artifacts, Tier 12-21 , Recolors, Legion Animated Items and Custom MOP Wings and 100s of Custom Mounts!

We would like to invite players to join our community,

You can get more information on our server here: https://wowportal.net