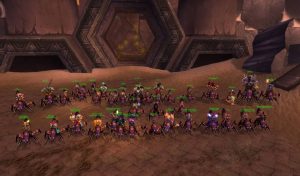 Experience the opening of Ahn’Qiraj, invade and conquer the Black Temple, and stop the Lich King before he dominates the entire planet with the Scourge! As the community completes content, new content will be made available!

Plaguewood is a progressive server from Vanilla to WOTLK (using the 3.3.5a client), emulating the official World of Warcraft timeline, by releasing content time to time.

– We have a progression framework that adapts the server conditions depending on the patch.

– Patches are scheduled and change automatically (scroll down bellow).

– Arena Seasons emulating blizzard ones with season rewards (we have a costum one in vanilla).

– Jewelcrafting will be available in TBC and Inscription in WOTLK.

– Blood elfs and Draeneis are available since Vanilla.

– Main cities have NPCS with HP/Damage adapted to every expansion change.

– Dungeon finder is available in all expansions.

What can you expect from the server?

– Progression since Vanilla to WOTLK.

– Focused both on PVP and PVE.

– NO Pay-to-win! (this means, we don’t sell gear from donations)

What are you waiting for? Join us!