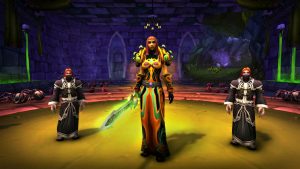 Greetings, everyone! This is our most recent Update, which aims to inform on what we are currently working on.

Faerlina will be a PVE server with the option of Warmode for Champion’s Guild.

We did a poll with our community. 2/3rds of our players voted in favour of a PVE server, but at the same time, considering our policy of giving our users the creative freedom of playing how they wish, we also decided to introduce Warmode as a feature linked with Champion’s Guild. Warmode is a feature introduced way later than Wrath that gives users the ability to toggle world PvP on and off. We will emulate something similar, but players who enable it will be able to gain Gold, Experience and Reputation with Champion’s Guild when killing a player!

The reason why most players picked PVE is probably because PVP servers are infamous for ganking. And of course, since most servers have been PVP, it’s seen as part of the experience. Our poll clearly showed us that people just don’t want to go through that again. And that’s understandable! We will give our players what they wish for.

According to Faerlina being a PVE server, Ironman will now be 3x XP only.

Our explanation is that the high rates available for Ironman Mode were a compensation for the always looming treat of World PVP. But since now that’s disabled, we still want to keep the challenge.. well, challenging. That’s why we decided to limit Ironman Mode XP gain to 3x 1-80.

Naxxramas buffs are now available! Our changes to bosses done for Challenger Difficulty aim to address critical weaknesses in raid design which make Naxxramas bosses boring. For example- Gothik adds have been buffed and now not splitting the raid into the two sides is impossible. Razuvius is now the progenitor Death Knight, the ultimate creation he was in the lore. Our buffs aim to make it a fun, engaging but also challenging experience to play Naxxramas, because we know it feels obsolete and boring compared to the glory of Ulduar. You can see the full list of buffs by joining our Discord: discord.gg/wotlk.

In the next few days, we will work on buffing Sartharion 3Drakes and Malygos as well. We think for Naxxramas we hit a perfect balance spot, where our buffs feel natural and not out of place, make sense raid design-wise and lore wise too. We will try our best to do the same for Malygos and Sartharion!

We are actively working behind the scenes to make our passion become reality! Thank you for reading. Until next time!