Awesome Events that Happened in Vanilla World of Wacraft 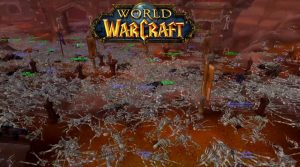 Lord Kazzak Kited to Stormwind – March 6th, 2005
On March 6th of 2005 an industrious (and obviously bored) player kited Kazzak from his then home in the Blasted Lands to Stormwind, wrecking havoc on players on that server.

At least I have chicken.

With the release of patch 1.7.0 on September 13, 2005 Blizzard added a new raid called Zul’Gurub. The final boss of the raid, Hakkar the Soulflayer, casts a debuff called “Corrupted Blood” which periodically inflicts 250-300 points of damage every few seconds while the average health of raid level players was 4000-5000 at the time.

The debuff can also be passed on to other players who are within close proximity to another player that already has Corrupted Blood on them. Originally this infection was confined within Zul’Gurub but quickly made its way outside of the instance by way of hunter pets that contracted the disease.

Within hours the Corrupted Blood debuff had infected entire cities such as Ironforge and Orgrimmar because of their high player concentrations and killed low-level players in seconds.