Plaguewood – A progressive journey keeps going further with the release of the Tempest Keep! 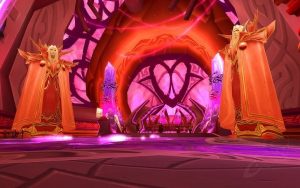 The mighty Tempest Keep was created by the enigmatic Naaru, sapient beings of pure energy and the sworn enemies of the Burning Legion. As a base of operations for the Naaru, the structure itself possesses the technology to teleport through alternate dimensions, traveling from one location to another in the blink of an eye.

Get ready for a new encounter in Plaguewood’s progression chapter, Tempest Keep has finally been released! Come and experience the progression through patches while you enjoy old content!

Plaguewood is a progressive server!

Experience the opening of Ahn’Qiraj, invade and conquer the Black Temple, and stop the Lich King before he dominates the entire planet with the Scourge! As the community completes content, new content will be made available!

What is a progressive server?

A progressive server emulates the official World of Warcraft timeline, by releasing content time to time. We start in vanilla and end in WOTLK patch 3.3.5a. For those that remember playing in the retail game is basically a simulation of content opening gradually.

Few or almost no other server has a system like ours. Our server is unique. We are very proud of this as we remember the old days of the good World Of Warcraft. All this changes bring back the competitiveness that we used to see on retail and on old private servers.

– We have a progression framework that adapts the server conditions depending on the patch.

– Patches are scheduled and change automatically (scroll down bellow).

– Arena Seasons emulating blizzard ones with season rewards (we have a costum one in vanilla).

– Talents locked depending on expansion. (eg: in vanilla, the last two lines of talents are locked)

– Jewelcrafting will be available in TBC and Inscription in WOTLK.

– Blood elfs and Draeneis are available since start.

– Main cities have NPCS with HP/Damage adapted to every expansion change.

– Dungeon finder is available in all expansions.

What can you expect from the server?

– Progression since Vanilla to WOTLK.

– Focused both on PVP and PVE.

– NO Pay-to-win! (this means, we don’t sell gear from donations)

– Daily fixes based on bug reports.

What are you waiting for? Join us!