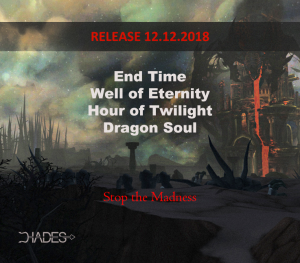 Clouds are darker and heavier with each passing day. With the defeat of Ragnaros, the malevolent flames stopped being the greatest danger to Azeroth at the moment. Global warming is no longer an imminent threat to Azeroth. Influenced by the Old Gods, Deathwing‘s madness is forcing him to start his final assault against all living or undead creatures inhabiting Azeroth.

Clocks are ticking and we are just minutes away until the long predicted Hour of Twilight comes. We bring you more information about the upcoming content release, which will be available on the 12th of December 18:00 server time, after the server restart.

What can you expect?
For a start, you can expect 3 new dungeons. End Time, which will provide you with glimpses of the future, where Deathwing wasn’t defeated, Well of Eternity, where you will attempt to obtain the Dragon Soul and the final dungeon, Hour of Twilight, where you will escort Thrall to Wyrmrest Temple.
New raid instance will be available, Dragon Soul, normal and heroic difficulty included. You will have the opportunity to stop the madness that fell upon Azeroth, in a fittingly named encounter, Madness of Deathwing. We hope you are not afraid of a bit jumping between cliffs and don’t mind tentacles.
Rogues will get a new quest line, which will lead to legendary daggers, Fangs of the Father. It’s Payback time for Dragonwrath, Tarecgosa’s Rest.
With the new content, leveling will become a bit faster, as it was on retail. We decreased the amount of experience needed to gain levels 71 through 80 by 33%. No need to stay in chilly Northrend, there has already been enough of that. You can warm yourself sooner in locations that were affected by the Cataclysm.
If you are tired of the constant fighting, fear not! Darkmoon Faire earned enough of gold from all those cards you made and they bought themselves a whole island. You will find there plenty of new activities to do, pony riding included.

Current PvP season will end on the 12th of December and the new one, Cataclysmic, will start one week later, on the 19th of December. At the same time a new villain managed to break free from her shackles in the Baradin Hold prison, Alizabal, Mistress of Hate.