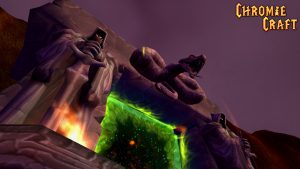 As always we hope everyone is having as good a day as possible. With the War Effort being completed and AQ40 opened on 20th October, we are at an end of our progression through Vanilla. That means it’s time for us to venture finally through the dark portal and into the Outlands for the first time!

The Azerothcore team created Chromiecraft in order to play through and fix all the content in the game, starting from the 1-19 bracket and going all the way to Ruby Sanctum. Never in our wildest dreams when we started with just a handful of players and people did we think we would expand as we have done. We continue to go from strength to strength with a strong team of developers, contributors and GMs. We also have what we feel to be one of the nicest, friendliest, and close-knit community out of any server out there. Allow us to take this time to thank you, our players for choosing to play here. Chromiecraft wouldn’t have been possible without you all.

We are pleased to announce that the Outlands & TBC will be available on Chromiecraft on 14th December!

With the arrival of Outlands, comes a load of new things to consider as well. We have summarised the key points we want to make you all aware of before Outlands as well:

Chromiecraft is a 3.3.5a based, Progression Through Expansions (PTE) RP-PVE realm. Powered and run by the Azerothcore team, we are an open-source non-profit organisation with the sole aim of making the best Wrath of the Lich King core, for free, for all!

Whilst our rates are blizzlike (x1), we do have double quest exp weekends (every weekend) as well as the Recruit-A-Friend module running which gives your permanent rested XP until 55 or for 30 days (whichever is hit first). Battlegrounds offered highly boosted exp as well, you are never too late to join here on Chromiecraft!

Join our discord – https://discord.gg/chromiecraft
Our website can be found here – https://www.chromiecraft.com/en/

Thank you all for taking the time to read and have a fantastic rest of your day!