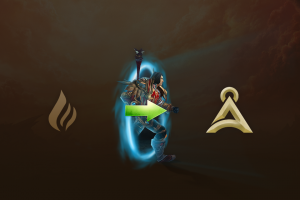 Long time since our last announcement and as many of our players already know the Netherwing team has been out there developing a Burning Crusade realm under the Atlantiss sign, making a new home and a place to play and enjoy their time for many new and old players. On the launch day, we were faced with a challenge that surprised the whole team and obstructed the comfort of gameplay of every player. After few days of brawling with it, we’ve joined our forces with Tauri, an admirable team who host a distinguished Mists of Pandaria server, who’ve offered their help.

It was a wonderful emotion to witness, collaborating with another team on the private server scene, especially in such a critical time as well as considering past events on the before-mentioned private server scene. They didn’t have to do that, yet they dedicated their time for the benefit of the community.

Many ex-Atlantiss developers came together with the Netherwing team and Tauri and gave their helping hand, it was just like the old days when we began our journey in 2011 eventually rising to be one of the most populated blizzlike Cataclysm private servers and it was one long and a crazy ride throughout these almost 8 years of developing it, and when we say a crazy one, we mean it! The waves and amount of players who enjoyed our content since then was enormous and we can’t express how much this project helped so many members of our team to develop their own skills and forge memories, and so it will forever be carved into the stones which bear our history and origins.

Right after the critical issues were solved on Netherwing, we’ve continued to stay in touch as we’ve both watched the work of one another before and continued to chat and code in our companionship, subsequently this is when we came up with an idea regarding our Cataclysm realm, thence, after many conversations, figuring out the details blueprint, we’ve decided to effectuate this through and make it real.

Thus, with no further ado, on the 29th of January, we’ll be enabling free transfers from Dragonwrath to Tauri!

Transfers will not require you to share any personal information with Tauri and will be performed in a moderate manner as more specific details will be announced in the upcoming days.

We thank you for staying with us for so long and allowing us to create and upkeep a wonderful place which someday can be a reason to trip down the memory lane with your friends, however, your character’s journey will not end here and will be continued in the realm of Mists of Pandaria!